The history of a dream

Established in 1968… …by its two founding partners, Pietro Paolo Bergamaschi and Diano Tura, today Dorelan B&T S.p.A. is a leading manufacturer of mattresses, sommiers, bed bases, pillows and accessories for hotels and homes.

Research, development and design are taken to levels of excellence, featuring production innovation that has always been accompanied by continuous process development thanks to constant, massive investments in the most efficient and modern production processes.

OUR EXPERIENCE OF OVER 40 YEARS OF ACTIVITY 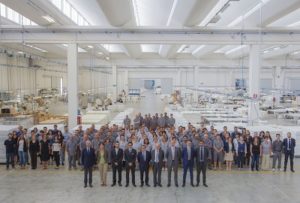 The new 40,000 square metre production site located along the A14 (Bologna-Forlì) highway is fully powered by solar panels and equipped with energy-saving systems, showing maximum respect for the environment.

Advertising in specialized sector magazines, periodicals with the highest diffusion, health content insertions, medical journals. Since 1999 annual televisions campaigns have been conducted on the 3 RAI Networks(NationalNetwork).

The B&T S.p.A. collaborate with the Department of Psychology of the University of Bologna for over 3 years, which has carried out 3 researches on sleep, which highlighted the best performances of Dorelan brand products compare to those previously used by a statistically significant sample of subjects on whom the test was conducted.

Documented: For five consecutive years (from 2002 to 2006) Dorelan was included among Europe’s 500, an award given to the 500 best European companies that in the previous three years had increases in turnover greater than 50% and internal employment increases greater than 30%.  The company was also honoured in 2007 with the Excellent Business Award, given by Eurispes to the top 100 businesses in terms of improvement in product quality and production processes in 2006.